This online tool lets you see check any YouTube video to see in which countries it is blocked at. It accepts both regular YouTube links, as well as shortened YouTube links that usually appear on Twitter.

Try this as an example: https://www.youtube.com/watch?v=7zp1TbLFPp8

Video not available in my country 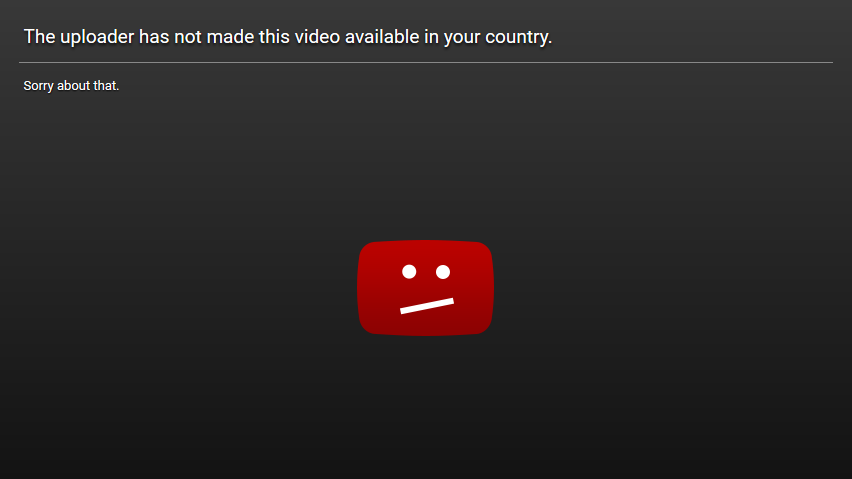 If you have spent any significant amount of time on YouTube, you are bound to encounter this message at one point or another:

The uploader has not made this video available in your country.

The official explanation from YouTube: Video not available in my country, is of little help especially as it pertains to actually getting around those restrictions. But basically if you ever want to see that video, you would actually need to be located in one of those regions where that YouTube video is not restricted.

You can get this data for your own application using our RESTful API. There are no api_keys. Limits is 1000 YouTube video IDs per IP Address per day. Example Query:

And this should be the output:

In order to get a big picture of all the restrictions of YouTube, we decided to do a large-scale analysis of as many YouTube videos as we could get our hands on. The first random "sample" of YouTube contains over 100 million videos that we tried gathering in the most random way possible. We don't know if the data that we have is good enough to make a broad generalizations about all of YouTube, but no other similar project exists anywhere on the Internet, so this will just have to do.

All the YouTube data was gathered in the month of October of 2016. So if you are browsing this page in the year 2018, some of this data is likely to be out of date.

The most interesting revelation about YouTube, is that only a small fraction of videos on YouTube have restrictions. Only around 3.6% (much lower for most countries, see below) of all YouTube videos have restrictions imposed on one or more countries. But that alone does not tell us much, that is why we dig deeper to find our what sort of content and what countries is YouTube most likely to block.

First analysis is concerned about the question - are more popular videos more likely to have restrictions? The answer is yes. What this chart below clearly shows, is that while the vast majority of YouTube videos have very few views (defined as less than 10,000), its "restrictiveness" is not distributed equally. Only around 3% YouTube's least popular videos have any restrictions, compared to videos with over a million views that are blocked in at least one country 13% of the time. So yes, restrictions are far and in between, but it disproportionately falls on more popular videos - videos millions of people actually watch - which is why it would appear that a lot more of YouTube is blocked than it really is....

Next analysis is concerned with content. Did you know that YouTube videos have hidden tags (descriptive keywords) attached to them by their uploader? Apparently YouTube is using those tags to make better decisions about what is shown to who. But those keywords are completely invisible to anyone watching and can only be accessed through YouTube's API. Around 79% of YouTube videos are "tagged" - meaning the uploader has attached at least one keyword tag to their video. So here we analyze this metadata to find out what most of YouTube is all about and what parts of YouTube have the most restrictions. The percentages shown in the chart below applies to ALL YouTube videos - even those without tags. Also, Keep in mind that YouTube is extremely popular outside the English speaking countries too, so those percentages may appear a little low to you if you are mostly browsing the English parts of YouTube.

Now let's dig even deeper and find out those YouTube "topics" that have the most disproportionate amount of restrictions. For this we include not just the tags attached to each video, but their titles too. The bar chart below shows the PERCENTAGE of videos containing that particular word in their title or as one of its tags, that are blocked in at least one country.

Let's do the same thing again, but this time try to find the most popular 2 word phrases (titles only) that are most likely to have restrictions.

Another way of finding out which sort of videos YouTube is most likely to block, is by calculating the percentage of videos blocked in each category. One thing to remember here is that not all YouTube videos related to "movies" would actually be included in the Movies category. It is the uploader himself that specifies the category (or doesn't) to which that video should belong, not the YouTube administrators. The top two bars in the chart below are not missing, they're just really tiny. Only around 0.02% of all YouTube videos are in the category "Movies". And 0.009% in "Trailers". By the way, the largest category by far is People & Blogs at around 26% of all YouTube videos.

Finally, not all countries are equally lucky with YouTube. Some have more restrictions than others. The most extreme cases are Germany and Switzerland, which is why those countries aren't even included on this map because it would skew the data too much. In fact, 85% of all YouTube restrictions include Germany either by itself alone or included among other countries. In other words - just 15% of YouTube's regional restrictions target countries other than Germany. What we found was that around 3% of all YouTube videos are blocked in Germany. That percentage rises to 10% for YouTube videos that have over a million views.

It would be very interesting to dig deeper into some of those countries to find out exactly what sort of YouTube videos are most restrictive in that country and then provide a list of selected videos that YouTube does not want you to see... that is coming soon.